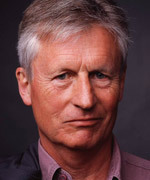 A Taste Of Paradise 100’ feature adaptation of Ernest Hemingway’s novel The Garden Of Eden, co-written with Fiona Howe. (Screenwriter).

Thomas/Tommaso (1 x 90’ Mediaset) based on the apostle “Doubting Thomas”, first broadcast in 2001, produced by Lux Vide in Rome and shot on location in Morocco. Director Raffaele Mertes. (Writer).

Born of the One Father/Au Nom du Même Père (3 x 52’ C4/TF1) director and co-author with Thierry Pfister of this international documentary on the history of Christianity and Judaism shot in Israel, France, Poland, the Czech Republic and the USA, co-produced by Taxi Productions and Firefly Productions 1990-1. (Co-Writer/Director).

Europolis (3 x 90’), miniseries commissioned by the BBC set in the near future of a Brussels autocracy. Based on his original story and co-authored with Jeremy Burnham, Erik Orsenna and Norbert Ehry, 1990. (Writer).

The Trial of Klaus Barbie (1 x 90’ BBC2) based on the transcripts of the sensational trial, the film was broadcast only three days after the verdict, and was shown to great acclaim at the inaugural FIPA in 1987. Starring Maurice Denham and David Calder. Produced by Dennis Woolf. (Director).

Le Grand Jeu – Bach in Potsdam improvised performance on the meeting of Frederick the Great and Johann Sebastian Bach, staged in Bouxwiller with The Musical Offering in a season by dancer/choreographer Louis Ziegler, 1997

Night Must Fall by Emlyn Williams, the anniversary season at Theatr Clwyd.

My People – own stage play based on the bitingly satirical Welsh short stories of Caradoc Evans. Theatr Clwyd, Mold and tour.

More about Gareth Jones on Wikipedia