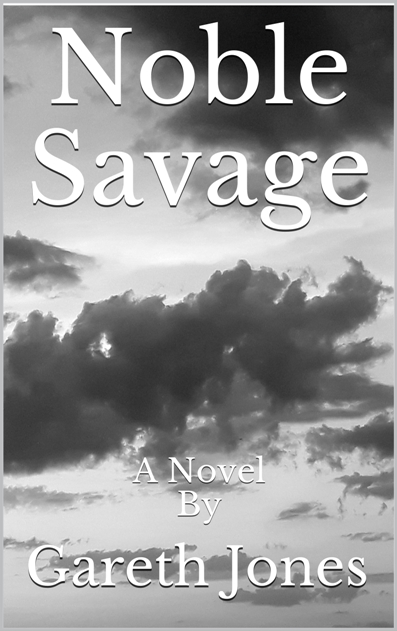 ‘Wheel about, you buggers! Wheel about!’ Iolo rose in the saddle and waved his hat above his head and shouted against the gale and the driving rain and the yapping of his dogs and the bellowing of his six hundred Welsh cattle strung out along the valley.

No one heard him. None of his lads could see the horsemen stealing down the hillside behind them. He spurred his mount into a gallop and raced to the end of the column, swearing and cursing. But what was unusual about a master drover bawling at his men, especially in this weather with the drove ten days behind schedule, the Wye most likely flooded and the rich profits of the London market receding by the hour? Iolo’s lads cheerfully raised their hats to him and yelled back affectionate obscenities.

The first gunshot echoed round the valley. At last they turned and saw the thirty-odd riders bearing down on the herd. ‘lesu Mawr, who are they?’

‘It’s a bloody ambush, isn’t it? Now move, damn you!’ Iolo cracked his whip and they left like souls let out of hell. A bullet hummed past his ear. The leaders were barely a hundred yards away. Iolo emptied his pistol at them and followed his lads.

‘Holy God,’ he muttered, ‘get me out of this one and I’ll never sin again.’ Then, more seriously, he vowed to put his life in order once and for all if the Lord should spare him: no drink, no swearing, no adultery, bath once a fortnight. And for good measure, as a double insurance, he raised to his lips the lucky stone talisman he wore around his neck, a parting gift from his pagan father.

‘If ever you need me,’ Gruffydd had said as they embraced for the last time on Pen Dinas hill above Aberystwyth Harbour, ‘hold this stone and call for me. I’ll be there.’

Iolo frowned at his own credulity, for he thought he had put superstition behind him with his heathen childhood. Then, surprising himself, he whispered, ‘Ride with me, old man. Wherever you are, dead or alive, send out your spirits to protect me.’

Iolo reached the head of the column to find Guto, his foreman, staving off a mutiny. The men were scared. They were ploughmen and shepherds, not soldiers. Fighting off bandits was not in their terms of hire. Guto fired into the air, and Iolo shouted, ‘You think you can get away? You can’t. There’ll be more of them waiting in the gorge, beyond that pass. We’ve only one chance: turn the herd around and stampede the bastards down. Then go in close with your knives.’

He and Guto charged into the tightly bunched herd. The leaders bolted with a squeal of fear and trampled into their neighbours. Terror swept through the cattle and Iolo’s men hallooed and fired their muskets for all they were worth, suddenly possessed of a mad courage, as if panic had flowed out of them and into their kine. A cheer went up as the herd turned about. All six hundred Welsh runts careered down the valley onto the unsuspecting enemy.

Iolo singled out his best shots. ‘Sam, Daniel, Jem, Jacco. Up the hillside! Stay under cover and keep them pinned down. Guto, take six lads round behind them. Up through the woods there. We’ll meet you in the middle.’ With his remaining ten men Iolo edged forward to the bend in the valley. The bandits were in among the bewildered cattle, struggling to control them and turn them back towards the pass.

Iolo had guessed right. He turned to his hot-tempered quartermaster. ‘Esau, there’ll be more of these buggers up in the gorge. You and Emlyn dig in above the pass. Keep them off our backs as long as you can.’

Four shots rang out from the hillside and four of the rustlers fell. Iolo’s marksmen were in position. ‘You see boys. We’ll teach them to meddle with Ystwyth lads. Charge!’ he screamed and his tiny band shot forward like a squadron of cavalry. In the valley they dismounted and dodged through the herd like ferrets flushing out a burrow, throwing away their pistols to get in close with the cudgels, gutting knives and poleaxes which every drover knew how to handle. Iolo remained mounted. If it made him a target, so be it. He had to keep watch for the others.

At the far end of the field half a dozen of the enemy dashed for safety and ran headlong into Guto’s troop, who scented victory and made short work of them. Then from the gorge came heavy gunfire. Iolo cursed and damned himself. He had forgotten Esau and Emlyn. ‘Back! Back!’ he yelled up at the hillside and his marksmen started running towards the noise. Guto’s troop joined him and they thundered up the valley, leaving Wil Rolo and a couple of others to mop up the stragglers and the wounded.

Emlyn Richards, a fishing lad of sixteen with blond hair and a tanned, freckled face, lay on his side in a puddle of blood, clutching his stomach. He was singing a hymn, his voice high and sweet, too shocked to realize what had happened to him. A hundred grapeshot fragments had entered his stomach at short range and disembowelled him. Iolo cradled him against his knee and joined in the hymn. He knew Emlyn’s parents; they were old friends. He had promised them more money than they had ever set eyes on if Emlyn would ride with him. ‘It’s a man’s life,’ he had told the boy. Not much of a death, though. Iolo turned away to reload his pistol, put it to the back of Emlyn’s head and pulled the trigger.

They lit a fire at the narrow end of the valley, near the pass, where they were best sheltered from the wind; they buried Emlyn with full honours and piled the corpses of their enemies into a shallow pit, which was all their strength could afford to such numbers. Then they sang a psalm of thanksgiving for their deliverance and carved up one of the dead runts to roast over the flames. The meat, and a flask of rum discovered on a dying rustler, put new life in them and suddenly they were all heroes, each with monstrous feats of valour to boast about, and Iolo was their Marlborough, their Alexander, their Julius Caesar, and they swept him up and carried him in triumph three times around the fire till he had to shout to be put down, reminding them that the glory was God’s, not his.

It was the culmination of a meteoric career from penniless vagrancy as a stuttering, frightened child whom folk thought defective or malignant because of his misshapen features, to fame and fortune as Iolo Bevan, master drover, householder and landowner, elector of the County of Cardigan and a legend to his own people for his handling of the cattle that were their only livelihood. He could enter any tavern in west Wales and be sure of a raucous welcome. Men would stand aside to let him be served first and raise their mugs to him not expecting to be acknowledged in return. At markets and fairs people loitered at his elbow to catch his conversation and maybe pick up a tip about a promising calf or heifer. Farmers would keep him up past midnight with tales of his own exploits, mostly garbled beyond recognition, while he nodded and smiled and threw in a word here and there. He was believed a great talker – men would preface their yarns with ‘Iolo told me this one’ – but in fact he rarely spoke much except when drunk, and then he regretted it: words never behaved as he intended.

His appearance, which had caused him so much torment as a boy, was now his greatest asset. Because his face was battered and lopsided where his father had dropped him off a horse at full gallop when he was three, people assumed that he was incapable of lying — as though plain-looking must mean plain-dealing — and that any mouth with as crooked a grin as his could not possibly smooth-talk and get away with it. Besides, Iolo’s actions proved him honest: he was the only drover in west Wales to whom farmers gave their cattle on trust, knowing that he would pay them exactly the London market price when he returned, with only a small commission deducted for himself Iolo never bought his herds outright, he hadn’t the capital. Ever since he began droving he had dreaded an attack like today’s, for what would happen to his friends and neighbours if he lost a whole drove? The loss would be theirs, not his, for his investment was no more than his time and effort. And what would they think of ‘honest Iolo’ if people starved or were evicted from their homes because he failed to return with the modest earnings that paid their rents?

Iolo took a swig of the rum as it passed round and stared into the flames, imagining how this latest feat of his would be retailed in the ale-houses of Tregaron.

‘He told me himself didn’t he?’

Iolo laughed quietly. ‘By Christ I’ve shown them a thing or two,’ he said aloud and drank deep. His vow echoed through him like thunder – no swearing, no drink, no adultery. Hadn’t he broken the first two already? He had taken Christ’s name in vain and then drowned that sin with hard liquor. And as for adultery . . . that temptation lay only a few miles ahead, as on every drove. Was this what the Lord had spared him for – to fall again; to boast of victory not his to claim; to revel in such a hollow reputation as ‘honest Iolo’?

He closed his eyes tightly and prayed for the will to repent. When he opened them an unfamiliar presence lurked in the shadows beyond the fire, sharing its warmth with Iolo’s comrades. Furtive, sly glances into the night. . . bright, pointed teeth gnawing at a meaty bone . . . wrists bound together with whipcord. For an instant Iolo recognized that crooked face, As if hearing his thoughts the man looked up, shifted uneasily, and looked down again closing his hands round the bone.