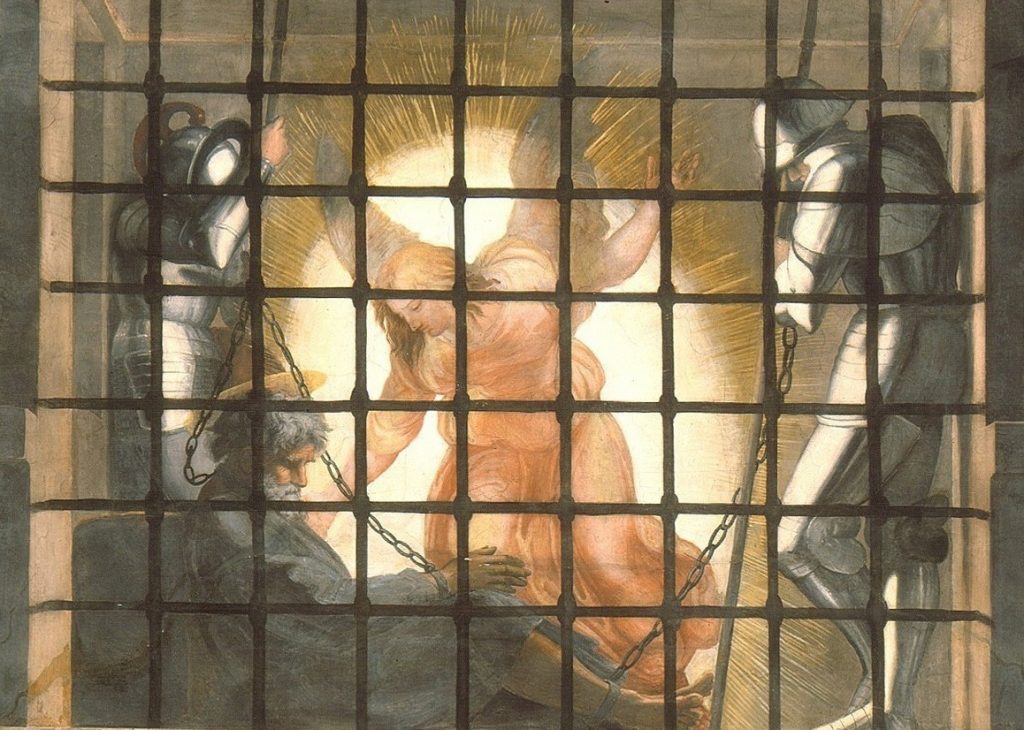 He surfaced painfully to a rush of water next to his throbbing skull and blinked on clouds through metal bars.

He tried to move but his body ached and his wrist was manacled to the pipes behind him.

A scratching sound came from somewhere close by.  Craning his head to one side, his swollen eyes made out a balding school master – or some such – propped up on a bare wooden bunk, a striped tie dangling loosely from his scrunched up collar, carving graffiti into the crumbling plaster wall with his one free hand.  “What are we here for?” he was muttering, apparently to himself.  “What is it all about?”

The rain hissed steadily on soaking flagstones far below, drops splashed onto the window sill.

Last night came and went.  The drink, the brewery crowd, the dictator’s official screen announcement that the pandemic was over.  ‘Fellow citizens, the coast is clear!’  His clever mockery of that flagrant liar and his sidekick scientists.  Mimicry had always been his talent, since he was a kid.  Oh how the crowd had laughed at him but it was one joke too many.  Someone had ratted on him to the militia.

Beaten black and blue, he dragged his broken limbs into a sitting position, elbow bent double beside his right ear, wrist locked behind his head.

“Evolution,” his fellow prisoner mumbled as he incised his illegible hieroglyphs for some future inmate to decipher.  “Faster!”

“Too slow!” he erupted with lunatic ferocity. “We’re not going to get there!”  Again the subterranean deity rolled and magnified his words and he abruptly turned, as far as his one handcuff allowed, with a wildly bubbling flow of invective. “Don’t you see? Homo Sapiens has run his course!  Not sapiens.  Barely homo.  Cavemen. Troglodytes.  Neanderthal!”

The nutcase was clearly off his head and getting on his nerves.  Something of last night’s japes returned to torment him and it didn’t help that he was still hung over.  Why should he, Joe Public, an unemployed actor, pay for one unguarded gag during a piss-up in a brewery?

“We must take control!  Control of our destiny!  Evolution cannot be allowed to go on blindly!”

This was the kind of language that had set his teeth on edge.  “Must.  Cannot.  Control.  Allow.”  The imperative was habit-forming.  Now everyone was at it.  Even this poor sod.

“If we can lose our teeth, why can’t we lose our aggression?”  The demented bonze stretched his lips wide and thrust a finger into his maw, as if to inspire a refractory fourth form.  “See?! No wisdom teeth!  Why not?  Evolution!  No need for them!  No raw meat.  No bracken. Our diet changed. So we lost’em!” He stared, as if expecting a clever riposte from the front row. “Lose the teeth but keep the wisdom!”  He thumped his fist on the hard pallet which groaned like an empty cistern.  “We’ve got to grow up or we’ll destroy ourselves!”

Something uneasy stirred inside him.  It was like watching his parody of last night’s scientists returning as double parody to haunt him. Was this provocation, was he being surveilled?  He didn’t like the way his cellmate grunted as if forcing something uncomfortable from his rectum, his hand emerging with a glass phial that had once been transparent.  “Can you reach the sink?”

He glanced to his left.  The cold tap.  Just about.

He had taken the phial before asking why.  “Why?” he heard himself ask many times over with the waste water gushing down the encrusted pipes.  “Why? Why? Why?”

“Accelerated evolution.”   Despairing eyes watched the phial, now lost, a message bobbing away on the waves.  “My life’s work.  Just do it.”

“What for?” He was in enough trouble already and was starting to wonder why this was happening.

“A higher order.”   The words finally came with artificial calm.  “Once that fluid hits the water supply, it can never be recovered.  It will make its way through rivers and oceans and all who drink will be changed in their DNA forever.  In two generations aggression will be dead.”

With a sudden eruption of fury he realized who the guy was.  It was the bloody scientist who paraded on screen with the dictator every week to tell the world how to behave, robbing them of their freedom and their soul.  The one he had taken the piss out of at the brewery.  The reason he was in here in the first place!  And now he was selling him hot gospel stuff about redemption, evolution, whatever.  Science made him sick!

“The dictator paid for my research, so I did what was required, and that is the only decent result,” said the false augur, nodding at the test tube entrails. “The last hope for mankind.  I don’t know why you’re here my friend but help me now,” he pleaded quietly, as a rusty key turned in the lock. “I know my predictions have been wrong many times. Once people laugh at you, you’re finished, that’s what they told me.  I’m done for but that phial could save us.”  He calmly straightened his tie as the medical team came in with the lethal injection.  “Remember me,” were his last words.  He was dead when they wheeled him out.  “Back later,” they grinned.

He watched the door slam, swung his left arm as far as it would go and smashed the phial against the cold tap.  A treacly substance dripped from the faucet into the sink.  Wrenching his bloodied wrist from its socket he turned on the water.