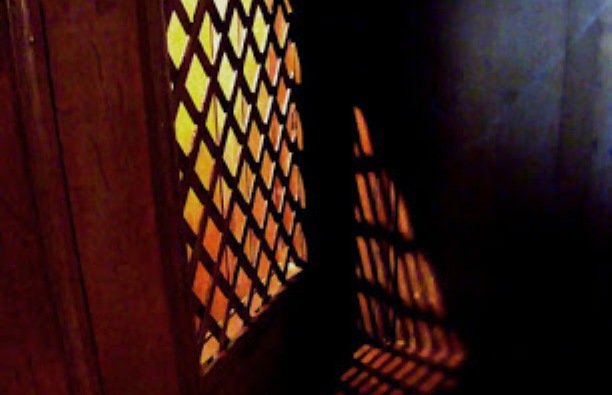 “Mind out there!”  The dolts had almost taken off the hand-carved gargoyles, the only distinction the imitation oak, mock gothic confessional could claim.  He had lost count of the confessions he had heard in there and the gargoyles had been his only solace.  They had wedged a forklift under the centre door and the penitents’ booths were threatening to snap away from the priest’s hole.  Now where was the sense in that?  If it was bound for the civil courts it might as well get there in one piece.

The removal men scratched their heads and went for lunch, leaving him in his parish church of thirty years amidst rows of single beds stretching down the nave, the central aisle disfigured by a heavy serge curtain hanging from the rafters to separate men from women.  His congregation had fallen apart with the new regulations – how do you congregate in ones and twos? – and the Diocese had sold his mission to the state for use by the homeless.  Well, he had no quibble with that, if it did mean early retirement, though why the homeless should throng where the faithful were barred was quite beyond him.

He was startled to realise he was not alone, but not as startled as the boy.  Young man.  He couldn’t tell nowadays.  “Can I help you?” he asked, not as charitably as he might have.  “If it’s a prayer you’re after you’d better be quick.”

“The sign says you’re open,” the boy explained, backing out already.  Too late.  Another shape materialized in the doorway, backed by the bright sunshine.  A girl.  Young woman.

“Ah, so that’s it, is it? Well look here now, apart from the fact my church is not yet deconsecrated it’s against the law.  Young people are not to leave their family units.  Now I know you, don’t I?”  He leaned familiarly on his confessional and jabbed a forefinger at the boy, who came from a decent home just up the road. The girl was an ex-urbe, her yellow tag proclaimed.  “And who might you be?  His sister?”

The girl was backing out but the boy blurted:  “We want to confess!”

Now this touched a raw nerve, for confession was the very foundation and corner stone of a solid community and its lapse, due to recent regulations following on ancient apathy, had hit him hard, as hard as remote last rites and virtual extreme unction.  He couldn’t be sure they were in earnest but the temptation to enlist the old battleship one last time was too much to resist. Confession would flush them out, he knew the old tricks.  “Well you’d better come along then…”

The curtained centre door took some un-jamming, with the forklift pronged under it, but the darkened side booths opened fair enough.  “One at a time, one at a time!” he grumbled but they were already kneeling, one on either side of him, the girl with more curiosity than shame, as far as he could judge, though the boy knew the ropes and made a good start.  “Bless me father for I have sinned in thought, word and deed…”

“So what’s on your mind, kids?” he growled affectionately.  “Very well, then.  How long have you been seeing each other?”

“We haven’t been,” whispered the girl beyond the lattice. “We’ve only just met.”

For a moment he wondered whether he was being taken for a ride.  “So what transgression have you committed?” he enquired with a note of whimsy.

Now he was not entirely unfamiliar with this modern scourge but the tale that followed made the hair rise on the nape of his neck as nothing else he had heard in all his days, and that included the notorious garage murderer whom he had reluctantly turned in despite priestly vows of confidentiality, a mortal sin for which he would undoubtedly roast in hell.  Now would that still pertain, now that the state had taken over the practice of confession?

“Outcomes?” he heard himself mumble.

“The thing is,” the girl chimed in. “It gets addictive.  And I’m still a virgin.”

He was getting a little hot under the collar, in every sense and direction.  “Well children that’s fascinating, I’m sure the Lord is listening but I’m not the right person for you.”  Finally he snapped. “But this is terrible! Sinful! What are you both thinking of? What on earth drove you to this and what are you doing in this house of worship?”

“We wanted to meet,” the boy said.

“We needed a safe space.”

“And for what purpose exactly, might I ask?!”  he huffed. “To confess? Or to desecrate this temple, as you have desecrated the temple of your souls?”

“To fall in love,” they answered in unison.

And suddenly he was lost for words, for he remembered now, for the first time in years, the way he had been in love, and the girl in question – a grandmother, now, for sure – and how  difficult the  priest had made it.

“Please absolve us, father.  We want to start again.”

It was the most drastic absolution he had ever given, apart perhaps from the garage murderer, who was still doing time.  But his church was to be deconsecrated tonight; as of today he was laїcized and in his heart he was defrocked.  They were young and misled.  Pornography was openly endorsed by the powers-that-be, it kept people quiet.  At least they had had the courage to denounce it.  “May the merciful Lord have pity on you and forgive your your faults… “

“Well now,” he said, mopping his brow as they emerged. “Your penance.”

He eyed them beadily and nodded at the row of hospital beds for the homeless, to whom they clearly belonged.  “I’m going into the vestry till removals come back.  You’d better look smart.”

He spent the next thirty minutes darning his socks, as he called it, and thinking of Friar Lawrence, and only returned when removals banged on the weathered oak doors, which he had bolted as a precaution.

The young couple were standing exactly where he had left them.  Wrapped in each other’s arms.