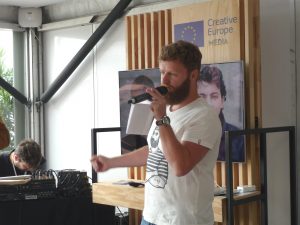 Adil and his mother have fled from a dark secret to make their home in a small, hard-stricken mining town. All they want is to lead a normal life but Adil’s hot temper constantly brings him to the brink of confrontation and does not make it easy for him to fit in.

Things take a turn for the better when he manages to get into the local motorcross club, where he falls in love with fellow schoolmate Romy and finally feels he is making a place for himself.

But when the town finds out that he is the brother of the terrorist that traumatised France two years earlier all his hopes fly away. He will always be a monster in the eyes of others and if he wants to survive he has no other choice than to leave all his dreams behind.

Antoine Delelis favours lonely, isolated landscapes and big pictures, his moody stories frequently those of the outsider, the exile of the heart. He likes cinema that is tough and uncompromising, sharp and playful, exhilarating and heartbreaking, striving always to bring the audience close to his characters by way of gritty, emotionally compelling performances.