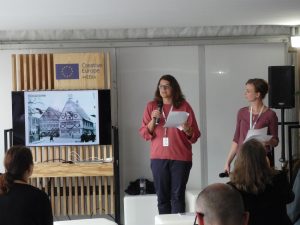 Based on true events, The Laundress tells the emotionally gripping story of how a group of women who wash the blood from the local Nazis’ uniforms come to rebel against their masters and surrender their village peacefully to the French at the end of World War II.

This remarkable turnaround is dramatised through the story of head washerwoman Sophie Schlegel, who must learn to confront her painful feelings about the death of her epileptic daughter at the hands of the Nazis, through an unlikely friendship with a French prisoner of war assigned to the laundry. When an allied bombing raid kills her best friend, she takes in the dead woman’s son Felix, even in the knowledge that this friend had caused her own daughter’s death. Just as she is learning to love again, Felix is recruited by the people’s army and seems certain to be snatched from her. Pushed to the limits of her endurance, Sophie knows that she must rise up save this young life, whatever it costs her. The peaceful rebellion begins.

The uprising of the women of Pfullingen was an act of great boldness and civic courage. In April 1945 they congregated in their thousands in the market place, chased the town’s commandant away and disarmed the Volkssturm. Afterwards they pushed the train cars, which were erected as tank traps, into the valley. Sophie Schlegel, draped in white sheets, surrendered the town of Pfullingen to the French troops positioned on the edge of the town. The war in Pfullingen was over without a single shot being fired.

This is a war story with a difference, an inspiring story of solidarity between women and their strength to conquer what they fear the most.

Developed with the support of the Filmförderungsanstalt/FFA