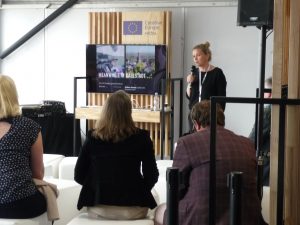 My Cousin is a creative documentary with a difference. Using her family connections and uniquely privileged access, documentarist Simone Wendel has for several years been putting together an intimate portrait of the most famous man in the world, President of the United States, Donald Trump. With Trump’s small town German roots in Kallstadt as her point of departure – already established in her hit documentary Kings of Kallstadt – she probes the perspectives of various family members to build a fascinating picture of this most contradictory of human characters.

Wendel’s story begins with two cousins, John and Donald, who became lifelong business partners. We learn about the migrant family structure that influences Trump even today, the bonds that place family members in important positions, the work ethic introduced from the cradle with loyalty paramount. Trump’s is a story of a family business at its best, from “dishwasher to millionaire”.

From cousin John’s perspective we learn about the family structure of the Trump empire, the formidable women in the Trump history – who have been ignored on too many occasions, according to Wendel – and the German grandparents’ adventurous story of migration, which laid the foundations for the Trumpian American dream. Wendel explores how an immigrant child became the Donald Trump of today, opening a window on the world of this polarising president in short sequences and drawing a more personal portrait than hitherto possible of one of the most controversial phenomena of modern times.

Developed with the support of the Filmförderung Baden-Württemberg MFG