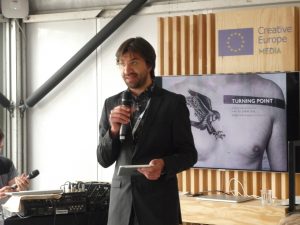 Based on the sensational novel Wende by Eva Ladipo, Turning Point is an international political conspiracy thriller with its roots in the reunification years, which plays principally between Frankfurt and London. Ambitious young lawyer René Hartenstein works at a Frankfurt energy company, where the death of a colleague under mysterious circumstances propels him into a hunt for the assassin that leads him into the arms of femme fatale Anna Smoktun.

Anna is a former Stasi agent from René’s East German home town, now a successful London businesswoman perhaps being run by Russian intelligence, attempting to manipulate German energy policy even to the point of violent sabotage. Who will survive this heady and dangerous game of cat and mouse?

In these days of fake news and media manipulation, Turning Point confronts the burning issues of who is really controlling the information we believe and shaping our political decisions at the highest level.

Jens Wischnewski trained at the Film Academy of Baden-Württemberg.