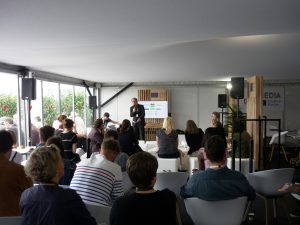 Behind the closed doors of a polite Basel neighbourhood, a small tragedy remains unnoticed for two weeks, the suicide of scupltor Jana’s lonely young neighbour in the adjoining house. Distracted by her creative projects and family life, Jana has failed to notice the woman’s distress and must now wrestle with a guilty conscience, which alienates her teenage daughter and threatens to pull her family apart. Thirteen-year-old Anna is appalled by her perfect mother’s failure and proceeds to reject everything her comfortable parents stand for, building a shrine to the dead woman’s memory in the deserted house, befriending a homeless immigrant woman whom she brings home and adopting the misfit nerd of the class as her boyfriend, an act of self-harm fuelled by rebellious anger, which leads to the brink of tragedy.

Stains or Stockflecken is Sabina Gröner’s second feature screenplay, a bold and probing exploration of the false values that lead us to lose connection with our fellow human-beings.

Sabina studied at the DFFB Film and Television School in Berlin, graduating in 2016.